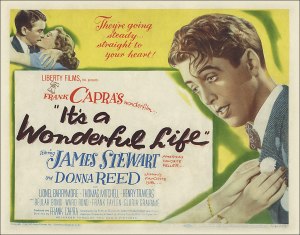 George Bailey shouldn’t complain. Yes, he desperately wants to get out of his one-horse town and see the world, but he’s got a gorgeous wife, a herd of rambunctious kids, a big house, runs his own business, his brother is a war hero, and he even scrounges up enough time to build a model bridge in his living room. The life! It’s wonderful!

Okay, it’s not all sunshine and lollipops. George (played so memorably by Jimmy Stewart) must go head-to-head with bully banker Mr. Potter (Lionel Barrymore) on a daily basis. Potter wants to own the town of Bedford Falls and it seems like he’s one man away from achieving that goal. It’s not like the family business (the Bailey Bros Building & Loan) would flourish—or even survive—without George. Absent-minded Uncle Billy (Thomas Mitchell) would ruin the place within minutes if he was put in charge.

It’s gotta wear on a guy to take on a money-grubbing banker when that banker’s morals are at pre-redemption Ebezener Scrooge levels. After Uncle Billy stupidly puts a large sum of dollars into the hands of the enemy (on Christmas Eve, no less), George feels he’ll be blamed and finds himself in a suicidal bout of depression. Along comes a simpleton angel (Uncle Billy’s counterpart, perhaps?) to show him a glimpse of what the town would be like if George had never existed.

You know this story, obviously. Everybody does. Either you buy the cornpone or you don’t. Some of director Frank Capra’s projects lay it on too thick, but this movie balances quaint charm and epic darkness. The American Film Institute clearly loved it because it was in the Top 20 of both their 1998 and 2007 Top 100 lists. I say this one belongs in the Top 5. I may not believe in angels, but I do believe in a movie that can still wring tears out of my eyes after so many Christmas viewings. It’s a keeper!