Rated R. It’s rough subject matter, so we tossed off a smattering of rough language. 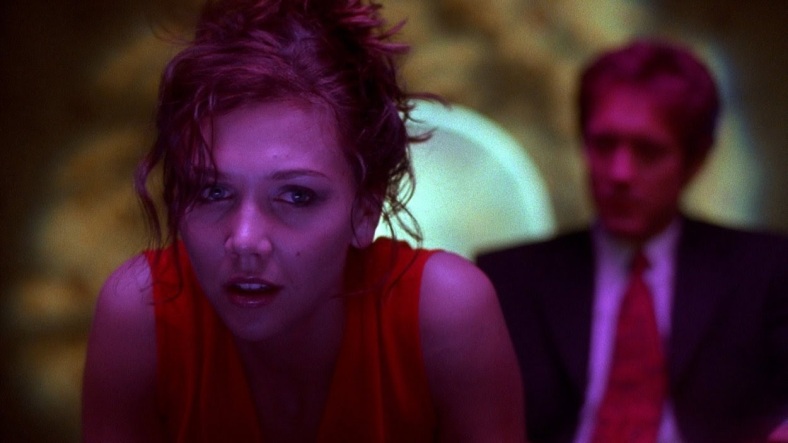 February is our “Month Of Strange Love” and the 1st of 4 unusual sex and/or romance films we’ve chosen is the one about the Spade-ist and the Magg-osist. The 2 lead performances in Steven Shainberg’s Secretary are the main event. Slinky sexy James Spader has been in other perverse pictures like this and he’s always convincingly saucy. Maggie Gyllenhaal, on other hand, was not the obvious choice, although it’s one of many risky roles she’s sought out. Like her brother Jake, she’s willing to take chances that many actors won’t. In this case, it’s BDSM with her boss…although this movie is about so much more than just that. So don’t dig a sharp object into your leg. Just eat a couple peas before you gulp down a lot of ice cream as the 428th Elllises’ Analysis delves into the goings-on in Secretary.

If you’ve been ordered to sit at your boss’ desk for days on end, you should bring a straw and a lot of Sparkplug Coffee. They still want to give you a 20% discount on your very next order. You just have to type our “top100project” promo code into the appropriate box.

Ryan’s got a sports movie podcast too: Scoring At The Movies

Links: Sick and Fur and Donnie Darko and Brokeback Mountain and the Fifty Shades series and The Lost Daughter

February 14th on The Ellises’ Analysis: Away From Her