It’s quite R-rated. Gotta be controversial when you’re reviewing a Tarantino flick. 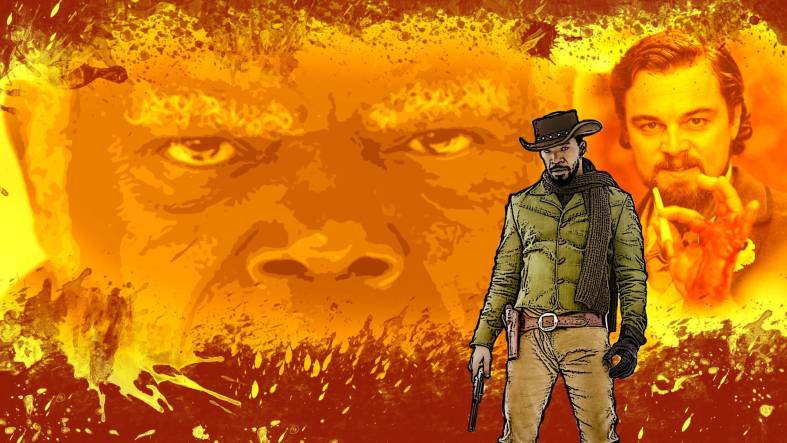 The Next 174 Project is a dandy of an episode as we rage on about slavery, racism, offensive words…and all of it in what ended up being Quentin Tarantino’s biggest hit.  He wasn’t at his best in this flick, although that doesn’t mean his direction or Oscar-winning writing are anything close to bad. He certainly always casts well and the performances by Leonardo DiCaprio, Jamie Foxx, Christoph Waltz and especially the fiendish Sam Jackson are about as good as anything you would see in the year 2012. The picture was—and still is—awash in controversy though. We spent 25 minutes having a fiery discussion about racism and even the Holocaust. If you’re not in the mood for any of that SJW stuff, listen to the first 12 minutes, then skip ahead to the 37-minute mark. In any case, shake our hands, lovingly cradle our dead bodies in your arms and let our sharp words pierce your ear cavities. You know you can’t resist.

Brutally killing brutal racists is best done with a few orders of Sparkplug Coffee. Get yours and also get a one-time 20% discount on your next order by using the promo code “top100project”.

For The Record: The interview where QT does his “black guy” voice was while promoting Django. Also, here’s the link where Jackson claims it’s impossible for QT to be racist. Also also, in addition to the films that were mentioned, Jackson was in Glass (one of his 4 big hits in 2019) and Shaft.

Links to: Reservoir Dogs and Pulp Fiction and Kill Bill and Inglourious Basterds and The Hateful Eight and Once Upon A Time In Hollywood and 12 Years A Slave and Our Hospitality and Django (1966) and Sweet Sweetback’s Baadasssss Song

Previously on the Next 173 Project: Being John Malkovich

December 16th on the Next 175 Project: Christmas Vacation